I drew and painted Honeydukes during a particularly Harry Potter-centric time of our lives. 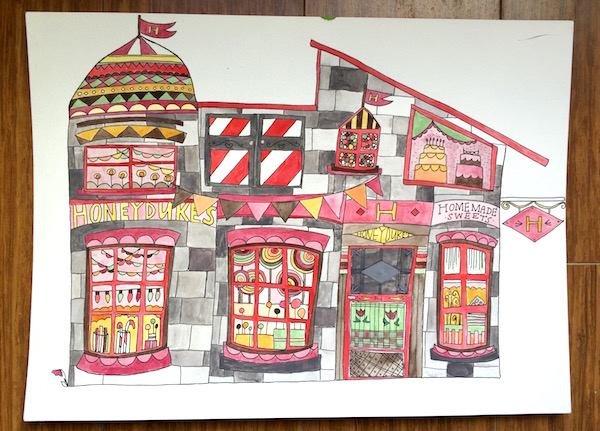 This winter wasn’t the worst! It was actually totally ok. We still hibernated and did some inside projects, and made it to the forest at least once a week, which is totally ok in my book.

We always go to Reed Canyon, Scouters Mountain, and Oxbow Park, almost every week. Reed Canyon has a new island, and we found an enchanted fairy realm at Oxbow Park, where Fern just gathered some limbs and made herself a shelter for fun (Thanks, Trackers!).

Scouters Mountain is about to get bulldozed to make way for giant monstrosities. I actually can’t think about it too much or it makes my guts ache.

Reed Canyon is always our go-to, and we’re there at least once or twice a week. It’s “our” forest and we know it really well. This winter, they cleared a path to a new island, with log bridges and stumps to sit upon. It’s lovely.

We went on this other hike by the river and Fern noticed that the trees were swaying. She asked if they’d fall down and I told her they were Red Alder. Their roots are connected and they’ve evolved to grow on riverbanks and near water, where the wind can be punishing. They are meant to stick together and hold each other solid. At the new island at Reed, there are Red Alder too. She pointed out this root wad and said, “Is that what you were talking about; how all the roots stick together on those trees by the water?” Yep.

She’s an Otter Scout  and she goes to Trackers every week, and we participated in some light assembly (some anti-Bundy pro-Malheur demonstrating).

And we did a lot of indoor stuff too.

She found a translate app for her iPad and just figured out some stuff in Spanish, no big deal.

She got a telescope for Christmas from her grandparents. The moon:

And this is actually Jupiter!

The art of Bart:

Reacting to finally drawing her favorite bird in Bird Bingo, the Blue-footed Booby:

Coming up with problems to solve together:

Squished ant under the microscope:

She made this sign one day and asked if she could put it up “in the city.” So she put it up on a pole across the street. It reads:

I love Minecraft and I am a girl.